Someday, I will get around to starting a blog post before 10:30pm. It’s highly unlikely that it will be any day soon, but it will happen someday.

Oh friends, week 4 was all kinds of crazy times. I may need to split this one up. But let’s see…

So I’ve been wanting to tell you about Alexander Technique. I don’t have time/actual knowledge enough to run you through all the history etc, which is why Wikipedia is an amazing tool. But I do want to say that it’s one of my favorite classes at the moment. Not only because of our amazing teacher, whom I mentioned last post, but the work, while seemingly simple, is incredibly effective at creating a physical awareness of the spine, and my posture (and thus, my mother) will forever be grateful.

Also, I’m certain it looks hilarious to the outside eye: a group of people all walking serenely around a room with amazing posture, the floor littered with yoga mats and tennis balls. Or perhaps they might peek in as we work in partners to find each other’s Soaz muscles (I’ll just leave that decidedly vague image there, and let you do what you will with it).

In fact, I don’t think we have a single class that, were someone completely unrelated to theater to walk in, wouldn’t furrow a brow. One person standing and crying in front of 16 other people? Someone beating chairs with a yoga mat? A group walking around a room rocking their hips in every direction (and probably giggling)? A circle of folks stretching their tongues at each other, or checking out their soft palates with mirrors and flashlights? All in a days work here.

I went into week four having rededicated myself to getting exercise outside of class. I think I did pretty well! I had one morning of pre-class pilates, and one trip into town on my bike in spite of the rain and the mud. I even handled the massive spider who had hitched a ride with me before making his way to my hand with more aplomb than usual (there wasn’t even a scream!). Between that, two days of fight, and some heavier movement classes it was a much more physical week than usual and my body was so grateful. Week five, not so much, time to re-commit for week 6. Right now that sounds like a terrible idea.

The other activity we started in week four was helping out with the Fall Festival. Fall Festival is an incredible program, wherein Shakespeare & Company directors go into ten (relatively) local high schools and direct a 90 minute version of a Shakespeare play. The schools perform them on their campuses, but then they all bring them to the Shakespeare & Company campus and perform them for each other in what is said to be an incredibly electric 4 days. Throughout the process, the students are encouraged to be a unit in many ways. They work on each other’s sets and props, they’re continually told it’s not a competition, and they attend a series of Common Classes all together. The first Common Class was a fight class, and I’ve never seen anything like it. So many kids all crowded into a high school gym, all supportive and all incredibly excited. The class moved so quickly, and the things they did made my jaw drop. Somersaulting into one another, running and jumping into each others’s arms, and learning and performing a huge battle in a matter of minutes.

We got to do some Fight too! And I love it so. Most other places use the term Stage Combat, but Tony Simotes, who is also the Artistic Director of Shakespeare & Company, doesn’t like the life-and-death connotations to the word Combat. Fight here is taught a little differently than other places I’ve taken before. While there’s still plenty of emphasis on technique, a lot of weight is given to the actual acting of the violence. We are constantly asked to consider what it would take to strike someone in a particular way, and what is the effect of being struck.

And we’re moving faster in these classes than in the Month Long Intensive. In our first two classes we moved through roundhouse punches, stomach punches, and back hits. Our second day one of my classmates was stung by a bee on his hand and was unable to participate, and I was lucky enough to work with Jason, a company member and teacher here. I had a ridiculous amount of fun, and working with Jason meant I was getting pointers throughout all of class. I was super pleased when Tony sort of nodded at me partway through class and said seriously “You can do this work. You can really do this.”

It’s the little things. Also, we’re going to move into weapons soon, because King John has so many armed fights in it. I’m truly excited.

Ok, I really need to be sleeping now. I have a little more to tell you about week four, and week five was also eventful, but it may be a while before I get to those, as we don’t have a night off this week. Partially because we’re moving into an intense week of Clown! Hooray! It’s going to be messy and difficult and you’re going to have to wait at least a week before I can tell you about it!

Before I go – a picture or two! We got a lot of rain, which meant a lot of awesome skies:

and, of course, the colors and the pond: 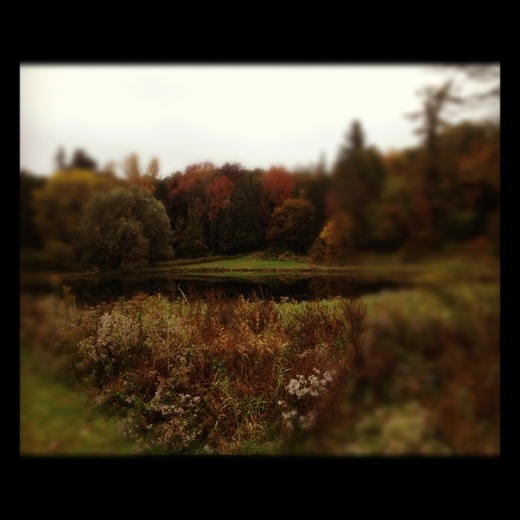 6 Responses to week four. part a.