Week four is shaping up to be interesting indeed.  But that’s not what I’m here to talk about.

First!  Some things that are pretty:

My friend and classmate Jenna May took this amazing picture.  It really encapsulates the beauty of this fall pretty well I think.  She was kind enough to grant me permission to use it here. 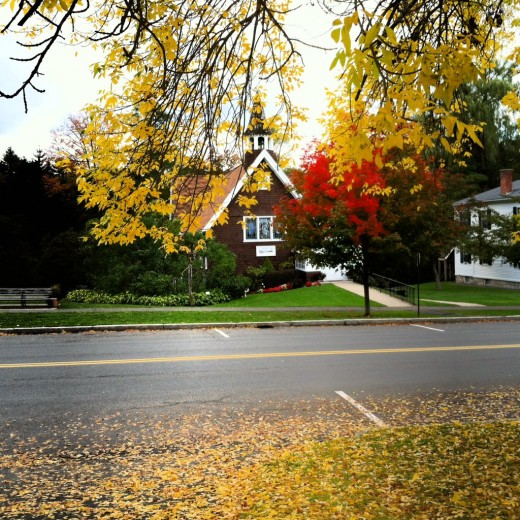 I also took another panorama so you can see the change since the first week.

Ok, so here’s the truth of the matter – week three was frustrating.  I wish it wasn’t so, partly because my last post was a doozy and I would like to follow it with something lovely and life affirming (but mostly because then I wouldn’t have had to wade through all the frustrating bits!  ahem.)

Which was exacerbated by the fact that classwork seemed to be crawling.  We had been doing a lot of Incorporating the Critic (unfamiliar with this class?  Please reference the tome entitled “week 2 (part 2)”) but it’s a difficult and time consuming exercise, which means often in a 3 hour class we would get through 2 people.  We’d had our scenes since week one, but due to a swiftly changing schedule it had worked out that many scenes hadn’t had a session on their feet yet (including us, until that Friday anyway).

We did have a class on using the First Folio, we started looking at sonnets, and we got to chat with Kevin, the head of the education program about what our involvement would be in Fall Festival (more on that next week).  But it basically all amounts to a whole lot of sitting.  Sitting and watching, sitting and listening, and sitting and sitting.

Don’t get me wrong, we still had voice and movement every morning.

And the movement!  Oh the movement.  I wish that I could put Kristin, who teaches movement classes that run the gamut from warm-ups/stretching routines that dovetail with our voice work, to period dance, to movement pieces focused around our characters and scenes, and Toddy, who teaches Alexander Technique, in my pocket so you could all experience how amazing they are.

I wish that I could clearly express how simple their classes seem, and how brilliant they really are.  I wish I could make you understand the way that Kristin makes everyone feel like a dancer, and that the steps we do are simple but completely joyful.  I wish I could relate to you the way she manages to keep the room in hand but the mood is always light.  I wish I had four hours to talk about Alexander work, and how strategic positioning of a tennis balls gives even those of us with the worst habitual posture an effortless regality.  And the way that Toddy balances our other instructors in such an amazingly ephemeral way.  But there’s simply no way I can convey even a fraction of it all, so back to my point which was:

Working 13 hour days and only moving during 3 of those hours is tough.

The good news is that Friday night we got to work our scene, if only for 30 minutes.  My scene partner is Nick, and he’s marvelous.  He’s literally a foot taller than me, so our Othello/Iago physical picture is pretty great, and his booming voice makes him even more intimidating.  When we went through the Standing Up exercise, wherein we had instructors feeding us lines in small chunks, I found myself really wishing I could be the ally Othello was looking for, that I could really help him instead of mislead him.  But the more we work the more delight I’m finding in his downfall, and reveling in being deliciously manipulative and vengeful (“mine is an evil laugh!”).  Even more satisfying was judging that I was able to accomplish the suggestions given to me, and trust my own work.  The scene still has a lot more work needed, but Nick is a pleasure to work with, and the character is such a rich one that my excitement level is still high.

Did I tell you that we have audition classes on Saturday mornings?  Looking at old posts it seems I skipped over this.  We spent the first two classes working solely on entrances and intros.  I have taken a handful of audition classes and we have worked on intros before, but watching my classmates enter one at a time it became so amazingly clear how much we say about ourselves before we ever get to the actual audition material.  In week three we finally got around to doing a full monologue, and I was excited to be able to incorporate my critic a bit within my speech!  Hooray for learning!  And I got some good feedback about ending the monologue with the audience in mind, and finding a resolution that takes care of the audience.  Because it’s a piece from a show I’ve been in, I hadn’t thought about the possibility of bringing resolution to the end of the speech, since that’s not where the scene goes, but as an audition piece it absolutely makes sense.

I’m happy to say that the upside of a tight budget has been lots of cooking, and often cooking with some wonderful women.  My roommate Iam (who is an amazing rockstar with a blog of her own (she’s sleeping now, but I will get permission and link to her writing soon, so those who are interested can read about this experience from the point of view of someone who has to sleep in the same room with me).  There might be a couple of posts on her blog dedicated to the harshness of my alarm.

So far we’ve made corn and tomato pie (twice!  because it’s so nice), as well as mushroom and leek toasts, a couple fancy pastas, brownies, two soups, some incredible salads, and more. Tomorrow is the last Friday of the farmer’s market here on campus and I will be sad to see it go, but the weather is definitely turning and last week was a poor turnout in the rain.

Speaking of which, I need to decide on a soup for next week – any suggestions?  So far I’ve done a curried lentil and a two bean and chard.  Healthful recipes that can be made vegan and do not need special/quality kitchen utensils needed (I could write fourteen screeds on the sorry state of the cooking utensils in our kitchen.  So spoiled).  I do think some Shakshuka is in order soon.

Ok, it’s way past my bedtime.  We have a long week this week due to a special workshop this weekend (WEEK FOUR SPOILERS), resulting in our day off been pushed to Monday.  I will try to update then!