Really trying to get over the cognitive dissonance of blogging week two while in the middle of week four.  Oh, for more hours in a day.

Actually, if I had more hours I would probably just sleep.

Oh, for more hours in the day.

I thought I had some pictures to share with you, but it turns out I didn’t really take many in week two.  I do have some good ones from week three though, so based on current trending, you should get to see those in about two months.

Ok, where was I?  Oh yes, I shared with you my new anger awareness (hooray!  anger!), and it’s time to dip into some more of the uplifting – loneliness!  (and the crowd roars!)

Yeah, I’m literally just realizing how this may not be super pleasant for you guys.  At times it’s unpleasant for me as well, but mostly I find it fascinating, and, more importantly, useful.  So let’s dive in.

In addition to our mornings of Voice and Movement work (now including Alexander Technique, hooray! more on that later), we started working on our scenes.  It’s been a while since my last update, so you may have forgotten that I’m working on a scene from Othello (a cutting of Act III Sc iii, for those of you who are curious), and I’m playing Iago.  We start scene work with Dropping In, followed by Standing Up.

I’m tempted to just leave those names there for you to guess at what such an activity would entail.  Partly because that’s amusing, but also because they’re pretty nuanced exercises and I fear I haven’t the time to explain them in great detail.  Suffice it to say, they’re exercises based in an exploration of language that allow the actors to engage with the words and their scene partner without the distractions of holding scripts or trying to recall memorized lines.  If you’re completely consumed with curiosity about the mechanics, well – HANDLE IT.

JK, just ask me next time I see you.  Or leave me a comment expressing your fervent desire for a Dropping In blow-by-blow and I’ll try to include it in a future post (we’ll be doing this exercise for the entirety King John, once we start rehearsals after Thanksgiving, so all is not lost).

Ok, we’re finally to the loneliness section.  I should do subheadings or something.  Then those of you who just want to know what I’m doing and not have to experience these crazy emotional shifts with me could skip sections.

The human psyche is a strange beast.  Or rather, my psyche.  I realized many years ago that I have this thing about being left out.  Now, I’m certain no one likes to be left out, but I definitely have a thing.  I feel incredibly hurt, angry and sad when I judge I’ve been left out of something, even when I know that it’s completely unintentional.

And here’s the thing – I don’t just fix it by jumping in to the event or conversation on my own.  Instead of fixing the problem, I just feel lonely.  And there’s a sort of solace in the loneliness, a sort of justification for my self-pity.

All of this I know about myself.  And as I started to watch this decades-old pattern unfold during the second week of the conservatory, I finally realized something – this loneliness, this isolation in a crowd is a form of protection.  Protection from embarrassment, from rejection, from any kind of emotional risk.  And once I was able to name my own reticence to engage as protection, I started picking up on all the little pieces of myself I’ve been hiding.

Those of you who see me often and hang out with me casually, you know I sing my life.  Not in any grand musical theater way, but rather in the way that the anticipation of a good meal requires a rock riff, and cold feet a wistful ballad.  These songs are unique (and totally brilliant – ahem), and when I’m comfortable, they happen really often.

Except not here.  I was astonished to find that I’d gone an entire week without an indie-rock verse to my socks.  Or a folk tune about the clouds. Or a children’s song about puppies (let’s be honest, most of my songs are about puppies.  I think about puppies a lot.)

And then I got up to work during Incorporating the Critic.  This is a rather unusual exercise, in which the actor is asked to start a monologue.  During the monologue, any time the actor has a thought/judgement about their work, they have to step to a stool on the side of the stage, sit on the stool and speak that thought as their inner critic would speak it.  No holds barred, no punches pulled, no apologizing or mitigating the voice of the critic is allowed.  Just all the ugliness that is personal judgement (for most of us anyway, I’m certain there is a mystical unicorn of an actor out there who doesn’t ever judge themself.  Somewhere.).  Once the judgement is expressed, the actor goes back and picks up the monologue where they left off, continuing to return to the stool whenever judgement occurs.

This sounds highly unpleasant, doesn’t it?  Well, it is, but it gets better, and it gets fascinating.  After the first pass through the monologue, the actor is asked to start incorporating the internal critic’s thoughts onto the text.  If they have a judgement about their work, they’re asked to express that judgement, and the feeling that accompanies it, on their lines, as though the character were having that judgement/feeling about their words or situation.  And what’s mind-blowing is how genius level appropriate that judgement/feeling is for the character, 100% of the time.

Our instructor made up this exercise, and he thinks that the success is due to the fact that our bodies know.  They know what the character is going through and they respond.  But often as actors we’re taught to think that there’s a “right” emotional journey for our character, and we work so hard to achieve the “right” character arc that we ignore our bodies.  But thoughts and judgements bubble up, and we assume they’re about our work, when really they are our body reacting to what our character goes through.

It’s kind of magic. Once you can do it.  But it’s not easy.  Well, let me rephrase – the incorporating was sort of easy.  What was really difficult for me was to start recognizing and stop managing the voice of my critic.  To give voice to judgemental thoughts was really hard, and harder still to let go of the habits I use to soften those thoughts – dropping the ends of my sentences and essentially throwing away the thought, closing my mouth and stopping my breath, and, of course, making a joke out of it.

And diving in to self-judgement can bring up some really deeply buried stuff.  For me, it is the essential question of whether I deserve to be loved (hello self-prolonged loneliness!  hello witholding of self!  hello reticence to express anger!).  It’s a conversation I need to have with myself, one I’m just beginning to address, and one I’m hoping to have settled – one way or the other –  before I leave here.

Are you as exhausted as I am?  Ok, here’s a pretty picture to help ease that glut of personal and difficult information. 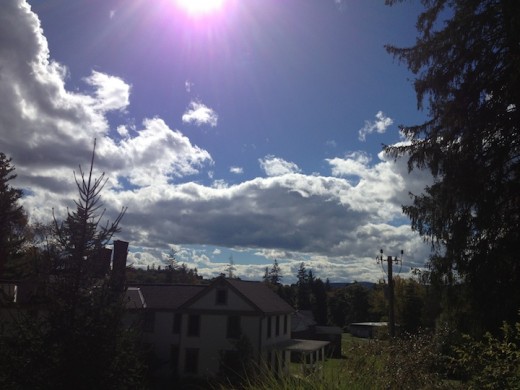 p.s. – I have an outline for week three! Hoping to put that post together for you (and me.  mostly me.) on Thursday so I can get this ship back on track.  Yeah, I just mixed the crap out of that metaphor – Jellus?

2 Responses to week two. (part two) (but elissa – aren’t you in week four already?) (yes. cut me some slack please.) (also, elissa, you’ve stopped using capital letters again) (i’m totally gonna ban you from my blog, hypothetical reader. i can totally do that. and you’d be upset because this post is totally epic.)