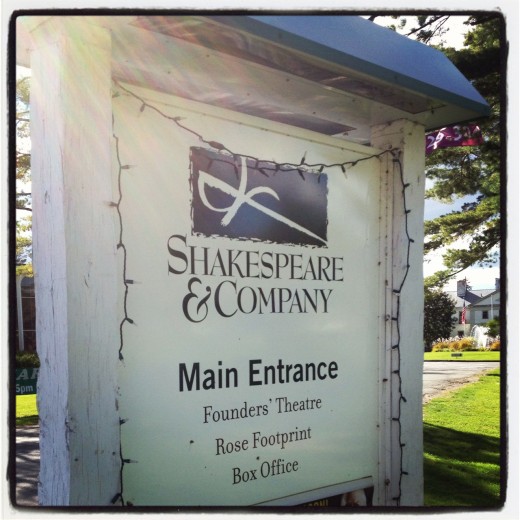 This sign stands at the threshold to the Shakes & Co campus. Why yes, there is a theme to this post.

I’m having a hard time organizing my thoughts for this post, and not just because last week was so full that, if I had had the time, I would have posted on Wednesday.  Mostly, I think, it’s because I’m on some sort of threshold.

I say this because a strange resistance started welling up yesterday and stayed with me for much of today.  After two solid weeks of working tenaciously and racking up a list of minor self-revelations (and I’ll get back to some of those in a bit), yesterday began a slight shut-down that I watched with a curious detachment.

Much of the work we’re doing in the Conservatory is based around Linklater voice work and letting everything – personal thoughts, feelings, the actions of others, the beauty of this amazing fall weather, you name it – in on breath.  It’s amazing how often I hold my breath, and I know, from the people in this program and observing the general public, that I’m not alone.  It’s a defense mechanism against pain, both physical and emotional, and fear and joy and hate and sadness and every other conceivable emotion that might not be socially acceptable to express.  And it’s well earned and completely necessary.  But as an actor, I need to be able to tap into all of those things at a moment’s notice, and in order to do so I need to have a full experience of them.  Not to mention, breath carries the vibration I use to express those things, and without a connected breath there is no hope of sharing my experiences with the world, onstage or off.

And yesterday I found myself holding my breath.  All day.  Through soup making, scene work, wandering the Apple Squeeze Festival, an attempt at starting this blog, a dinner party to celebrate a really marvelous woman, and a whole bunch of wasting time on the internet.  I didn’t sleep well (in spite of staying up way too late and going to bed exhausted), and found myself up before my alarm.  This may be common occurrence for some, but it’s highly unusual for me, as I sleep like a dead person (much to the chagrin of my awesome roommate).

So much money, so much sacrifice, so much understanding of how much I get out of every class, and yet I was just incredibly reluctant to let my feet take me out the door.

The good news is, I think I know what this is.  Knowing isn’t going to make it any easier, but so it goes.  I think I’m close to some sort of shift.  There’ve been a lot of revelations and awarenesses brought up in this last week, and I think they’ve built to something of a crescendo, and my body knows something big is about to happen and is digging its heels in.

I don’t know what this shift will be (though I have a hunch), or when, but I’m hoping it’s soon because this two steps back nonsense is incredibly frustrating.  It’s probably going to be messy (this is where I give you permission to silently thank your deity of choice that I’m several hundreds or thousands of miles away from you).

And I think it’s precipitated by the series of things I discovered last week.

I woke up a week ago feeling angry.  At everyone.  At no one.  At everything.  At nothing.  But that’s not super interesting.  What is interesting (read: sad, frustrating, telling) is that it took me so long to realize what I was actually feeling.

I can think of a handful of times of in my life when I have truly expressed anger as I was feeling it.  I judged those moments to be ugly, and I have spent many hours feeling ashamed that it ever happened.  So whenever I started to feel that peculiar tightness in my belly that comes with anger, I would let off steam by some sort of physical exercise.  This came to be habit, such that in recent years I stopped even recognizing the anger itself, and started interpreting the tightness in my belly as a need a move my body, instead of what it actually was: an indicator of a specific emotional state.

So, why was I feeling all this anger?  Well, it’s pretty much my hips’s fault.  And somatic memory.

I don’t know when the outside of my hips and glutes began to be painfully tight.  Many moons ago.  And it only got worse when I started commuting on my bike.  I’ve made motions toward really trying to release in my hips in the past few years, but nothing like the release we’ve been working on here.  Loosening the hip sockets is a focus of the breath work, in order to create more space and ease for the breath to drop in and the vibrations to sound out.

I’m happy to say I’m now far more aware of my anger than I have been in many many years.  Learning to express it instead of storing it – well, that’s part of why I do this theater thing.  Onstage I can unleash anything and everything, though I’ve certainly got a long way to go toward honing that skill.

This post is getting epically long, and I’m only a third of the way through all the things I wanted to say about last week.  Here’s where I go all Peter Jackson and break this puppy up into pieces.

But before I leave you for the night, I want to share some excitement and a goal for this week.  Lucky for you, they’re related and thus this will be over quickly.

My goal: to get a little outside exercise every day.  While we have movement of some sort every day, the exertion level is variable.  So I went asking around about a bicycle, and it turns out my housemate has one she rarely uses, and she said I’m free to borrow it.  Check out this sweet ride! 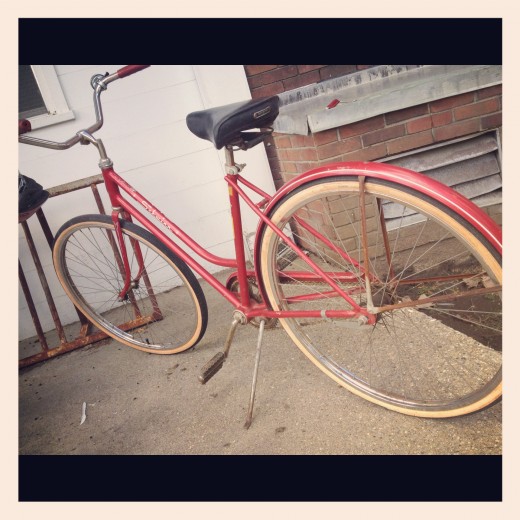 It has an adorable bell!

I took a short ride during the dinner break today (have I mentioned the amazing light of these fall afternoons?  Amazing) and it was so lovely.  I’m excited for many, many more (stay away rain!).

5 Responses to week two. (part one)