Getting in the wayback machine once again.  I give you: the Seventh Week of the Conservatory (aka the week of October 22nd).

So I told you all a bit about dropping in.  To date, I had only dropped in scenes from plays, a few pages at a time.  But this week we began dropping in King John.  (We would eventually come very close to dropping in the whole play, with the exception of a few short scenes).  And it is TOUGH.  We try to take a break every half an hour, but to sit very still and intensely focused on the people around me the words coming fast and furiously, is physically challenging.

Also, I spent the weekend helping a friend move, and I am sore, which makes the many hours of sitting all the more difficult.  But Dolla Dolla Billz ya’ll!  Oh, did you think I did it out of the goodness of my heart.  I am, alas, powerfully motivated by money.

We have a new voice teacher!  Well, she’s new to some – I had the pleasure of working with Ariel when I was in the Month-Long Intensive.  Dennis has gone to play Lear in Milwaukee (I think?), so Ariel is stepping in for a few weeks while he is gone.  I’m actually really glad for the switch – Dennis has a specific routine, and it’s easy to get into that routine and think THIS IS THE WAY OF LINKLATER.  When in fact, it’s just the way Dennis teachers Linklater.  It helps to make the fundamental teachings clearer, when learned a couple of different ways.

I made a veggie cassoulet.  It’s…not very good.

But we got to do more clown!!!  Awesomesauce.

The first day of this, our second clown intensive, we did a little work with out clown voice.  Strangely enough, when we first started last week I thought my clown didn’t really speak much.  Until she started swearing under her breath.  And now she has this completely made up, eastern european influenced accent and she just won’t shut up.  I have to admit, it was more than a little influenced by my love of Hank Ventures bad Russian accent (seen here at about the 1:00 mark because you know want to watch it).

Oh, and we had homework!  We had to work up a clown act.  We didn’t really know what that meant, but Jenna May and I put something together and it seemed to amuse people.  Have I mentioned how important music is to my clown.  She is constantly singing, and our clown act consisted of me singing Feed the Birds from Merry Poppins while Jenna May ruined everything.  I guess you had to be there.

Once again, I’m coming up against my anger barriers.  It’s so ingrained that I find myself up there and I can’t even fathom what the next step is, how exactly I can even go further with what I’m doing.  And then we wrap up and it seems so obvious what an insanely angry Eastern European (influenced) 900 year old witch clown would do.  It’s definitely a testament to how I’ve completely walled off that part of myself – even my imagination gets stymied when I try to go there.

But I had a little break through on the last day, as a few of us attempted Clown Suicide.  This was a fraught class, as several people had experience with suicide, and could see no value in reenacting such a thing.  It spurred a really great discussion about the purpose of comedy and clowning, and whether topics should be off limits or not, and I wish I could tell you any of the things Michael Toomey said, because he is wise and it was fascinating.

Anyway, I was telling you about my success (!!).  And now that I say that I realize describing to you my clown’s attempt at hanging herself from gym mats with my headscarf and singing songs about how they’d all be sorry when I was gone is not going to be nearly so funny as it was in the playing of it.  But I guess what I can say is that I let go a bit, and went a little further (getting busted all the way of course), and then I let it change, and I found and end, and I felt like a million bucks.  And that was my clown success.

Things I will take with me from clown: “Don’t miss a thing.”  Shorthand, for take it all in, notice everything, have a thought about everything, and share that thought with the audience. “It’s all good information.”  The idea that everything that I notice about myself and my reactions and my internal working and “off balances,” they’re all informative, and having that information means I am that much more equipped.  “Clock that.”  Take it all in.

The last thing I want to share with you guys is this new exercise we’re embarking on, called “First and Lasting Impressions.”  Are you wincing yet?  Just wait.

We began the first evening of First and Lasting by sitting in a circle, and everyone had two pieces of paper.  At the top of one we wrote our name, and under that “First Impressions.”  Then we passed that piece of paper to the right, and for two minutes we wrote our honest, anonymous first impressions for the person whose paper we had been handed.  Once we had done that 15 times and had our own paper back in our hands, we wrote at the top of a second page our names, followed by Lasting Impressions.  Once again, in two minute increments we expressed our honest thoughts about our classmates.

We only had time for one person to go tonight, but we’ll all go through it eventually.  Eric went tonight, and he sat that the head of the circle (is that possible?  do circles have heads?), and he read out his first impressions.  We sat and listened, tasked with thinking of writers, characters, or actors that were conjured by the words Eric read out.  Then we bombarded him with those names – monologues, characters, writers and actors he should look into.  And then again for his lasting impressions.  And again we bombarded him.  Then we talked a bit about the contrast, about what changes from the first moment of meeting him to knowing him for a few weeks.  Eventually the goal is for us all to know ourselves so well that we can exploit the ways we are perceived, possibly play into them with a monologue at an audition, and then follow that up with a monologue to turn the auditors expectations on their heads.

It’s brilliant and painful.  Like a lot of self awareness work.

Audition class this week was cold read, and I was disappointed I didn’t get to work because I like me some cold reads.  I think I’m pretty good at it.  But that remains to be seen in next week’s class.

I really want to go out and nail some auditions.  I’m ready for that to start happening for me I think.

I leave you with this picture of my clown.  Enjoy. 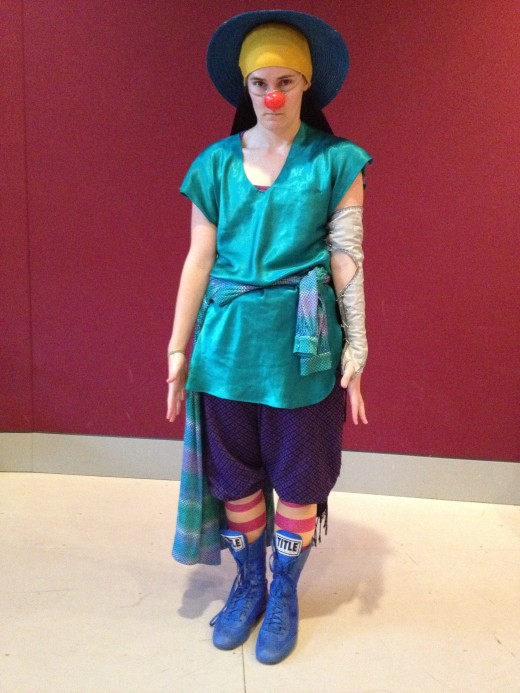