And I’m back!! I suspect my triumphant return to the blogoverse will be hailed by major media outlets in all the places. I’m glad you’re here to witness it.

It’s been a crazy couple of weeks since last I posted. There’s been clown, and hurricanes, and clown hurricanes and broadswords, and rehearsals and – I’m getting ahead of myself.

Week 5 started on October 8th, and hurricane Sandy wasn’t even a twinkle in Global Warming’s eye.

I did some sonnet work. It may seem strange to some that sonnets are used as part of an acting class. But truly, they are an amazing tool to get down to the brass tacks of Shakespeare’s verse. First, the have a very strong and rigid form, with three quatrains, or four line groupings, with a strict rhyme scheme, followed by a rhyming couplet. Shakespeare’s plays are written in what’s called blank verse, or unrhymed iambic pentameter. However as his writing progresses, he increasingly breaks the form of the verse – in my opinion, usually strategically. But the sonnets are a strict form from which he rarely deviates, which makes them a great tool to learn how to handle verse.

Shakespeare & Company teaches that a line of verse should be said all on one breath. If there is a thought shift in the middle of a line, that can be accomplished by a hanger is pace, or pitch of voice. A breath is to be taken at the beginning of each line of verse, so the actor is literally taking in inspiration at the beginning of each line. This may sound contrived and strange, especially in a culture steeped in enjambment and in texts of Shakespeare that have been heavily edited in order to be easier to read. But when performed, this method produces a text that sounds like people talk – changing directions quickly, building thoughts as hey are spoken. It’s dynamic and interesting, and a huge contrast to much contemporary Shakespeare.

Also, the sonnets contain it all. All the huge emotions that are integral to the human experience. Love, loss, hope, doubt, jealousy, mortality, anger, resentment, passion, dreams won and lost. And the reason they can hold such vast quantities of heartbreak and joy is precisely because their form is so rigid. I know that sounds strange and kind of incomprehensible, but it’s really true, and very clear on the demonstration. So let’s have a sonnet party and I will show you what I mean. (Ain’t no party like a sonnet party ya’ll).

So this may seem like a theme, and that’s because it is: my sonnet work focused on anger and not listening. Of laying down the law and not listening to the other person. Yeeeeaaah, many weeks later I’m still working on that.

Our assignment for audition class this week was a 2 minute modern monologue. Modern refers to 19th century through late 20th century works, and most people think of Shaw, Ibsen and Chekhov as the primary playwrights in this period. I worked up a monologue from In the Next Room (or, the Vibrator Play), which I was lucky enough to perform in earlier this year. This was a bit tricky, because it’s actually a contemporary piece, but because it’s set in the 1890’s it sounds as though it were written the. Also it’s a really remarkable piece, and in working on it for this class I not only found so much more depth to the piece, I fell in love with it all over again. I once again publicly state: I would play that role forever if someone would let me.

I found something awesome while looking for modern pieces: Project Gutenberg. It’s a free online resource of works of literature, and it’s amazing. It seems as though my kindle should be heavier it’s now so full of plays and books. (Yep. I’m a kindle person. I love having an actual book, but I also like biking and not killing my back. I wasn’t sure I would but I absolutely live my kindle).

We got to do more fight! I just adore fight class. Telling a physical story safely but with emotional connection is really the best. I didn’t write down what we worked on, but I think we did more punches and building our own combinations. Awesome.

It’s surprising how much of my free time is spent cooking. Our breaks throughout the week are at most an hour and a half, and often there’s text work or scene work or memorization or twenty other things to be done, so having something easy to reheat or quickly assembled has been key. And since we really only have a day and half off each week, a large chunk of time is spent shopping for and prepping food for the week. It’s a great habit actually, and I’m hoping to be able to carry it over into being home.

And the very last thing that happened in week 5 was the announcement of casting of the show that will close out the conservatory: The Life and Death of King John. Surprisingly enough, I was cast as King John. I will have a lot more to say about that in future posts. For now, I leave you with pretty pictures. 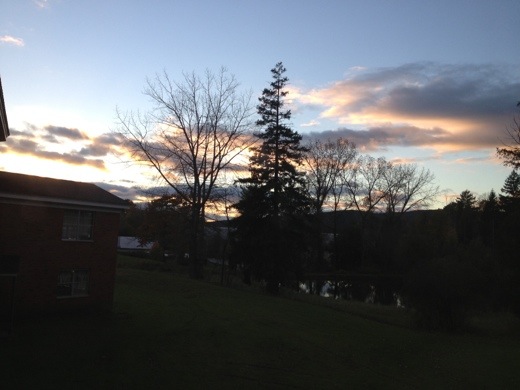